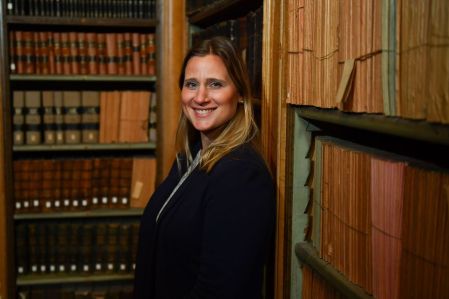 As a leading figure in the sports world Ruggiero will bring a wealth of knowledge of athlete, governance, fan-engagement and business experience to the committee at a time when the sport is driving forward its global growth mission and importantly, to be relevant, attractive and inspiring to the next generation of participants and fans.

Ruggiero is perfectly placed to play a prominent guiding role in World Rugby’s mission having been at the heart of some of the biggest decisions impacting the future of sport. Currently serving on the IOC’s Digital and Technology Commission, the Ethics Commission, the Nomination’s Commission, she was formerly the chair of the International Olympic Committee’s Athletes’ Commission (2016-18), an IOC Executive Committee Member (2016-18). She is currently the CEO and co-founder of Sports Innovation Lab, the global market research firm exclusively focused on the sports technology industry. In her role, she oversees the firm’s strategy of helping sports, technology, and media properties engage the fan of the future through data and analytics.

Ruggiero will bring an intimate knowledge and passion for athlete matters, both as a former chair of the IOC’s Athletes’ Commission and also as one of the world’s most decorated and celebrated Ice Hockey players – a gold-medal winning four-time Olympian with a record number of international appearances for Team USA, who became a member of the Hockey Hall of Fame in 2015.

Ruggiero will begin her four-year term on the Executive Committee from 1 September alongside fellow independent director Lord Mervyn Davies, ensuring that the decision-making body and the sport benefits from a strong independent voice through the addition of an experienced and highly-skilled independent member.

“As a four-time Olympian who has played more ice hockey games for Team USA than any other man or woman, former IOC Executive Board Member and IOC Athletes’ Commission Chair, and CEO of Sports Innovation Lab, the Executive Committee believes that Angela has all the right attributes to make a highly impactful contribution to the work of the committee and World Rugby.

“Alongside her strong business acumen and sport governance roles, Angela is perfectly placed to call upon her experiences as an athlete and more recently an athlete representative to advise our strategic direction on crucial areas such as fan engagement, player welfare and growing the global game. In what has been a ground-breaking year for women in rugby with the launch of our ‘Try and Stop Us’ campaign, we are delighted to welcome such an outstanding female leader to help us achieve our mission of a game for all.”

Ruggiero added: “It is a great honour to be appointed as an independent member on the World Rugby Executive Committee and I am looking forward to using my experience to help guide the decision-making process in what is a dynamic and growing global sport.

“This is an important time for rugby and sport more generally, and I am particularly excited about what rugby has to offer for all young people around the world. Through the Executive Committee I hope to help further a sustainable blueprint to ensure that the sport is attractive, innovative, and accessible to all.”