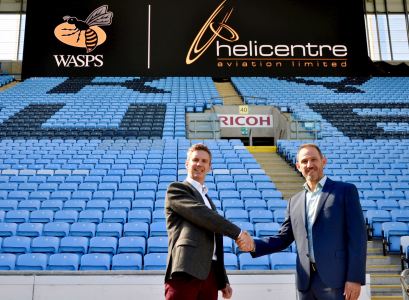 Wasps Rugby have announced that Helicentre Aviation are the latest company to join the Affiliate Partner Programme at Ricoh Arena.

The new partnership means that, as well as giving the firm exposure on Ricoh Arena’s new giant 188-square-metre LED screen and around the stadium on Wasps matchdays, Helicentre Aviation will be present within the Premier Club for a selection of games and will be supporting the Wasps Commercial department for some VIP activation days.

Helicentre Aviation, which was founded in 2001 by Directors Chris and Katie Line, was originally based at Coventry Airport, and later moved its headquarters to Leicester Airport.

The pair’s expectations of creating a one-stop training academy and commercial air operation were far exceeded, having trained hundreds of professional pilots and creating a significant number of jobs for pilots and operations staff.

Today Helicentre owns and operates a large fleet of modern Cabri G2 and Robinson R44 helicopters, has opened up an EASA and FAA approved base in Florida in the USA, and operates the largest onshore gas pipeline contract in the UK.

Stephen Vaughan, Chief Executive (Sport) at Wasps, said: “We’re thrilled to have Helicentre Aviation on board as an Affiliate Partner for the new season and look forward to welcoming them to Wasps matches throughout the season.”

“Our new partnership with Wasps has natural synergy, especially regarding our academy programmes, and we are proud to be part of an association with a company which shares the core values of our business.

“We look forward to growing our relationship with such a prestigious club and we are excited about the opportunities the partnership will bring as we move forward into the new season.”