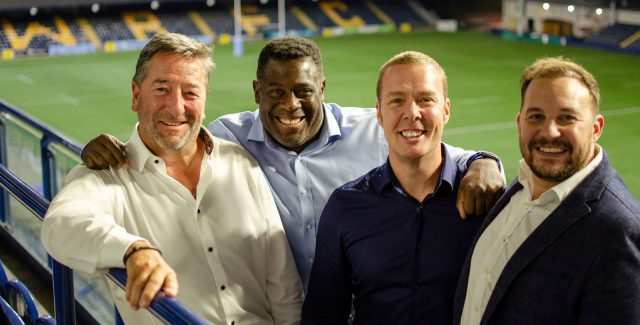 Worcester Warriors have launched an Ambassador programme which will see former players involved in matchday activities at Sixways and the club supporting a charitable trust which is being set up to help former Warriors and their families at a time of need or crisis.

Warriors co-owners Colin Goldring and Jason Whittingham are keen to ensure that players who have represented the club in the professional era are valued, respected long after they have finished their careers at the club.A committee has been set up, headed by former Warriors wing Nick Baxter, who have compiled an extensive database of former players and their contact details.

Every former player on the database has been asked if they could support the Ambassador initiative by getting involved in a matchday activity at Sixways at least once during the season.

Those activities will include being a matchday host, taking part in a question-and-answer session or visiting sponsors’ boxes.

“This is a fantastic opportunity for former Warriors players to re-connect with old team mates, share a few beers and also support a charity which has been set up to help them and their families in their hour of need,” said Baxter.

“Colin and Jason appreciate the contribution that players have made to the success of Warriors in the professional era and they want to recognise and value all the hard work they have put in to make Warriors one of the top 12 clubs in England.

“The Ambassador programme and access to the Trust is open to everyone who has represented Warriors in the professional era – from 1996 onwards.

“The contribution of every player who has worn the Blue and Gold during that time is valued and we would like everyone to support the Ambassador programme.

“A working group has been set up to organise the Ambassadors programme and we are looking for as many volunteers as possible to give up a little of their spare time to help out with matchday duties a couple of times a season.

“Ambassadors can also support Warriors by utilising their network of their business contacts to open up new commercial opportunities for the club or taking part in guest coaching sessions at local clubs and schools.

“There will be two major fund-raising events during the year to support the Charitable Trust, an annual dinner or ball and also matches between past players against counterparts from other Gallagher Premiership clubs.

“By supporting the Ambassadors programme former players will be supporting a charity which will support them.”

Subscribe below to receive your free digital copies of the Rugby Blindside newsletter (published every Quarter) and our new ‘Q&A’ and ‘Club Profile’ features which bring you closer to the grassroots game and provide a true insight into what happens ‘off the pitch’ at grassroots rugby clubs.